stands with the warriors at Standing Rock who are fighting

to protect water, land, and Mother Earth from corruption.

This stand-off embodies our modern day struggle, as the

world watches the 524-year old war come into its closure.

And it is crucial that we remember Occupy 2 Decolonize's

stop driving campaign, as we are all in control and must

in the oil economy.

As at Standing Rock, so in the Bay Area. Just as the

grounds, so too have the UC and City Government continued

to do the same to Ohlone burial grounds here while facilitating violence against Mother Earth.

Zachary Runningwolf was one of two people who landmarked the oldest Ohlone sacred site in West Berkeley more than a decade ago. Now, the city government including the three councilmembers who are running for mayor (Arreguin, Worthington, & Capitelli) have allowed construction on this graveyard, which constitutes a hate crime against the Ohlone people. It is time for REAL CHANGE! 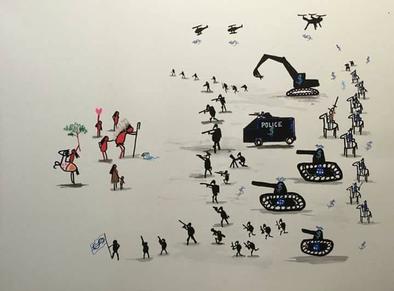