To make matters worse, in 1925 UC Berkeley Anthropologist Alfred Kroeber erroneously claimed that the Ohlone no longer existed. In 1927 the tribe ceased to be listed on the Federal Register, and even after Alfred Kroeber had acknowledged that he was wrong, it was too late. To this day, the United States government still refuses to recognize the Ohlone in spite of their continued existence.

In the wake of this violence, the Ohlone have voiced a rather modest request: for the remains of their ancestors, numbering at more than 10,000, stored under the Kroeber anthropology department of UC Berkeley to be repatriated into tribal custody. Yet the UC - motivated by stubborn racism and systemic corruption - has refused to do so, in violation of federal law.[1]

The Ohlone's story has much in common with that of the other indigenous tribes living throughout Turtle Island. Runningwolf, as an elder of the Blackfeet nation, is a recognized leader in the indigenous community and has been on the frontlines of the struggle for indigenous sovereignty for decades.

Runningwolf has fought for the independence of Ohlone Park (also known as People's Park) from the UC Regents & Police, and he was one of two people who landmarked the oldest Ohlone sacred shellmound in the Bay Area. In addition, he led - with Ohlone support - the longest urban tree-sit in U.S. history, in defense of an Ohlone burial site UC Berkeley aspired to build on. And crucially, Runningwolf has long been a vocal proponent of the Ohlone's request to have their ancestor's remains returned to them.

One observer reported that outgoing mayor Tom Bates' take on the issue of repatriation - which had been brought before the Berkeley Peace & Justice commission, and then to him - could be best described simply as "racist." Bates' dismissive attitude toward the Ohlone is paralleled by the UC's assertion of control over Ohlone Park and the Berkeley police department's continued use of the Ohlone ancestors' remains to teach their officers forensic sciences.

The confluence of Bates' racism, the Berkeley police's abuse of the Ohlone ancestors' remains, and the history of Ohlone Park make it clear that the office of Mayor can make a major difference when it comes to indigenous sovereignty. Electing Runningwolf to become the mayor of Berkeley would be a major step forward in the indigenous struggle for justice, and truly unprecedented in the history of indigenous leadership at the local level of United States government.

[1] Article 12 of the UN Declaration on the Rights of Indigenous Peoples, to which the U.S. became a signatory in 2010, notes that Indigenous people have the right to the repatriation of their ancestor's human remains.

When the Spanish arrived here in 1769, more than 50,000 Ohlone lived in the coastal region. The Spanish systematically removed the Ohlone living nearby from their villages and confined them to slave camps from which they were barred from leaving. After approximately 100 years, the land had come under control of the United States, the Bay Area had been settled by European colonists, and about 90% of the Ohlone had died from disease and the harsh conditions of the Spanish Missions.

While many of the tribes of Turtle Island have signed treaties with the Federal Government (which have nevertheless been overwhelmingly violated), the corporate interests eager to exploit California's rich natural resources ensured that no treaty was ever signed with the Ohlone. 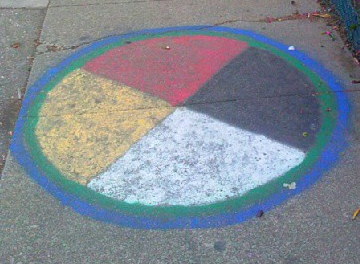