In 2013, a small number of regents quickly and undemocratically selected Janet Napolitano to become the next UC President, without the input of students or faculty.[1][2] Napolitano - while serving as the US secretary for Homeland Security - played a major role in increasing deportations for the benefit of detention centers run by prisons for profit.[3]

Scarcely a year later, the Regents announced that a major tuition increase would be implemented over the next five

years, deciding to make students pay even more for what was once a free public education rather than cutting down on executive pay & overhead.[4] All the while, UC Regent Richard Blum - who played a large role in getting Napolitano appointed - was personally profiting from student fee collection through UC rennovation initiatives like the Lower Sproul Development Project, because his private equity firm owned the construction subcontractor.

Peaceful student protests over this issue - which converged with nation-wide protests over police brutality - were forcibly suppressed through the use of police violence. This alone illustrates the importance of the mayor's office when it comes to addressing systemic UC corruption and the marginalization of students in UC decisionmaking.

One recent, and particularly relevant example was the UC's long-range development plan set forth in 2004. While then-mayor Tom Bates had initially pledged to fight it, he later announced that he had negotiated with the university in secret and come to an agreement - with no public review or input. In the words of Councilmember Dona Spring: “The city gave up everything and the university gave up nothing... We’ve ceded sovereignty to the university and given up our ability to set our own zoning code.”[5]

The position of mayor is essential when it comes to resisting profit-driven UC corruption, and uniting students and residents for the good of the community rather than the Regents' investment portfolio. It is critical that we elect as mayor someone who has a proven track record of commitment, consistency and success when it comes to these issues. Without a doubt, Zachary Runningwolf stands out alone of all the candidates in this mayoral race as someone who has dedicated nearly two decades of his life to this struggle.

With Zachary Runningwolf as mayor, the city government will: 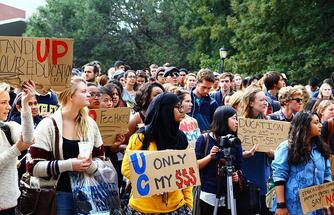