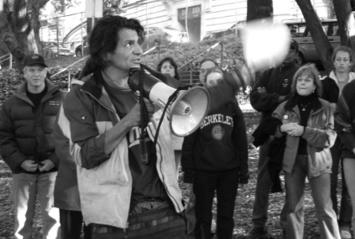 As a Berkeley High graduate who grew up in Berkeley and has lived here for decades, Zachary Runningwolf knows our community and our potential very well. When it comes to improving the well-being of our community, our campaign's ideas are numerous. In addition to our proposals outlined elsewhere in this platform to address police violence, election fraud, UC corruption, systemic racism, and environmental destruction, these are some of our other plans:

* An Emeryville roundabout from every BART station to Telegraph

* Increase taxes on the rich who must pay their fair share

A vote for Runningwolf means putting an end to the tens of millions of dollars given to developers in tax breaks[1] and unnecessary construction projects[2] and putting that money towards the above, as well as fixing Berkeley's transportation and affordable housing crisis.

Shutting down Telegraph (making it pedestrian only) benefits & is supported by small businesses & street vendors while reducing automobile pollution which is fueling global warming (past 400 ppm now) and cancer.

On the whole, we are looking forward to working with the people of Berkeley and creating a more democratic, accessible city government that works for you.